The Syriac Christians’ fleeing migration has its deep roots – at least – to the 4th century as we have a famous example like St. Ephrem the Syrian (+373), who was a refugee theologian by fleeing from his city because of wars. This fleeing and seeking a refuge in new territories was accompanied for sure with manuscripts’ migrations as well, which resulted with a phenomenon of: “manuscripts as refugees”. We will demonstrate in this lecture such a phenomenon in various realities and discuss it in different levels. The presentation will show how Manuscripts have been traveling and fleeing like refugees with the truth of being uprooted. Nonetheless, they do not lose their identity totally, since we can observe in many cases some traces and remarks to preserve their historical distinctiveness regarding their original authority and place of origin. This lecture will be presented by slide images to illustrate this phenomenon in many Middle Eastern manuscripts. A special focus will be highlighted on the current Syrian War and other war zones in the Middle East, where many cultural genocides has been witnessed.]

This lecture is open for all students who are interested in the topic of studying manuscripts, but it would be preferable to know some basic knowledge on Oriental and Middle Eastern cultures such as Syriac and Arabic. It is not necessary to know these cultures to attend and participate in writing an essay regarding this lecture.

Suggestions for a written assignment:

1) In the current phenomenon of the refugees’ conflict in Europe: how these refugees might enrich the new-targeted countries by preserving some possible manuscripts brought with them?

2) Describe a manuscript you choose to show the historical traces, marks and signs, which prove her historical identity.

2. Bevan, Robert. The Destruction of Memory: Architecture at War, London 2007.

7. Varlamoff, Marie-Thérèse and Mackenzie, George. Archives and Libraries in Times of War: The Role of IFLA and ICA within ICBS (International Committee of the Blue Shield), A Reader in Preservation and Conservation, 12/2000. 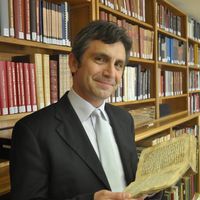